Posted by Ahmad Lubab Hidayat Posted on 18.46 with No comments 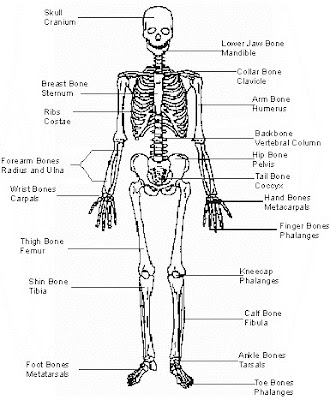 The main functions of skeleton :
· Shape
· Protection of internal organs
· Support of our organs and flesh
· Movement by attaching to muscles
· Mineral storage such as calcium
· Blood production in the bone marrow

Their specific function:
· Skull or cranium protects the brain
· Ribs protects the lungs and heart
· Thigh bone or femur allows us to move our legs, supports our upper

Framework of human limbs are on hands and feet.

Scoliosis is a condition that causes the spine to curve either away from the middle or sideways, making it look like an “S” or a “C” rather than a straight line.
Kyphosis is a curving of the spine that causes a bowing or rounding of the back, which leads to a hunchback or slouching posture. 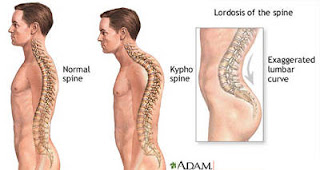 The roots of a plant are connected differently in different plant species and this is known as the root system. There are two main types of  root systems :

Flowering plants are often divided into two major groups - dicotyledonous and monocotyledonous plants.  Although these two groups are no longer considered valid by taxonomists, they are useful for gaining a general understanding of how plants function. Below are the general characteristics of the two groups, note that there are exceptions to all these characteristics.

Stems are made up of groups of tissues in which nodes and internodes can be distinguished. Nodes are where the leaves are attached and internodes are the length of the stem  between these points.  Stems come in a range of sizes and thickness. Shoots are young stems which have formed at the growth point of a plant. These grow in diameter and length to form twigs and later become branches. The main stem of a tree is called the tree trunk. Stems perform many important functions for the plant. Here are a few:
Support : The stems support the leaves in a position where they can absorb sufficient sunlight for photosynthesis. In young plants, the stem turgour pressure gives support to the young plant.
Food production : In many plants the stems (mainly young shoots, but even the branches and trunk in some cases) contain chlorophyll and are thus able to photosynthesise and produce organic molecules for the plant. In some plants such as cacti, the entire plant's photosynthetic area is comprised of stem and they have no true leaves.
Storage : Stems are important storage organs for the plant. They may store vast amounts of water as well as starch for the plant to use at other times e.g. cacti.
Transport : Stems contain vascular tissue which transports water and dissolved nutrients from the roots to the leaves.
The two main transport tissues in a vascular bundle are   phloem and  xylem and between these is a very important layer of cells, the cambium, which is able to divide.

The phloem
The phloem starts differentiating on the side of the vascular bundle orientated towards the outside of the stem and then progressively towards the middle, towards the cambium in the middle of the bundle. As in the xylem, the phloem which first differentiated is  known as the protophloem and the metaphloem is the later phloem. The protophloem is often associated with  schlerenchyma fibres - the phloem fibres. The phloem transports organic substances through the stem.


The leaves of our tree perform two major functions for the tree :
1. They are where the tree produces organic molecules by a complex array of chemical pathways including the most well known: photosynthesis.
2. They are important to the water balance of the tree. Water not used by the metabolism of the tree passes out through the leaves (through special openings called stomata) by a process called transpiration.

The leaves of the trees come in many different shapes and sizes. Their internal anatomy usually has ground tissue which contains chloroplasts. Chlorophyll, the light harvesting pigment of photosynthesis is green in colour and occurs inside the chloroplasts giving the leaves their green appearance.

The tree's leaves provide a large surface area for the tree, this is important to the tree for :
1. light absorption by chlorophyll during photosynthesis.
2. the absorption of carbon dioxide (CO2) for the production of organic molecules.

The tree's leaves are thin and none of its cells are far away from the surface. This is important for diffusion of gases (carbon dioxide, oxygen and water vapour) between the cells of the leaf and the atmosphere.

A typical leaf of a dicotyledonous plant consists of  two main parts :
The blade is thin and expanded and is supported by a network of veins while the petiole is slender and connects the leaf to the stem.

The leaf blade varies greatly in shape and there are numerous terms to describe its general shape.  These terms describe the leaf's

The leaf  blade has two types of configuration. It may be in one unit, in which case the leaf is called a simple leaf, or it may be divided into numerous small parts that look like individual leaves and which form a compound leaf. It may be difficult to tell whether one is looking at a simple leaf or the leaflet (pinna) of a compound leaf.  The distinction can be made by the fact that a leaf (simple or compound) has an axial bud between the petiole and the stem.

The petiole of a leaf may vary considerably and can be long, short, rounded or flat.  Some leaves have no petioles in which case they are said to be sessile. At the base of the petiole in many leaves are small leaf-like structures called stipules e.g. in peas, beans and roses. Between the petiole and the stem is a bud of a potential branch (an axial bud).
Leaves may be arranged on the stem in a variety of ways. The place on the stem from where the leaves grow is called a node and the part between the nodes is the internode.  If only one leaf arises at a node the leaves are said to be alternate, if  there are two leaves they are opposite and if there are more than two they are whorled.

Some plants and trees are monocotyledonous e.g. bamboo, bananas and palms.
The leaves of these plants do not have petioles like typical dicotyledonous leaves. Instead, their leaves consist of a sheath and a blade.
The sheath is often nearly as large as the blade and completely surrounds the stem, sometimes extending over the length of the internode.
The leaf blade is characterised by parallel venation . It is often necessary to examine the blade carefully to see that the veins are indeed parallel. Take a look at the leaves of bamboowhich is related to grass, both being members of the same plant family, the Poaceae.
Some monocotyledonous plants possess the largest leaves in the plant kingdom. Trees belonging to the Palm family (the Aracaceae) have very large leaves and the Raffia palm (genus Raphia) has the largest leaves of all, which can attain a length of 18m. Other examples of large leaves are found in the Musaceae, the banana family, and the Strelitziaceae, the bird-of-paradise flower family. 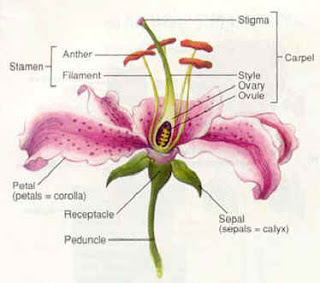 Butterflies and moths don’t begin life as flying insects. They start out as caterpillars, and, as they grow up,
their bodies go through a complete change, known as complete metamorphosis.

The life cycle of a butterfly has four separate stages:
•  First, the adults lay eggs on leaves.
•  When an egg hatches, a caterpillar comes out. The caterpillar feeds on leaves and grows until it is ready
to turn into a pupa. The pupa of a butterfly is often called a chrysalis.
• The body of the butterfly then develops inside the pupa.
• When at last an adult butterfly emerges, it flies off to look for a mate, and the cycle starts all over again.


Locusts develop their adult form gradually, without any sudden change in body shape. This is called incomplete metamorphosis.
Locusts lay eggs in damp, warm soil or sand. After around 10 days young locusts, called nymphs, emerge. These nymphs have large heads. They do not have wings, only wing buds but otherwise they look like smaller versions of the adult.  As the nymphs grow, they shed their skins or moult. After the fifth moult they are mature adults with fully formed wings and sexual organs.


Mutualism, when both species involved benefit from the relationship.


Parasitism, when one species benefits, and the other is harmed in the process.

A food chain indicates what feeds on what, it also shows how energy flows from one living thing to another.  A chain will always start with a plant (a primary producer).

In the food chain, bacterial and fungal spoilage served as decomposers.

Posted by Ahmad Lubab Hidayat Posted on 08.08 with No comments
Symbiosis is a close relationship between two living things, divided into three main categories; Mutualism, Commensalism, and  Parasitism. 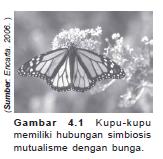 Mutualism, when both species involved benefit from the relationship.

o       For example, the symbiosis between a buffalo with starlings. Buffaloes gain with endless ticks on her, while starlings feel lucky because getting food such as fleas.
o       Another example is the relationship between butterflies or bees with flowering plants. Butterflies and bees need nectar found in flowers as food. Flowers need butterfly or bee to help the process of pollination.

o       For example, the symbiosis between the shark with remora fish. Remora fish which swim near the shark's body will contribute to roam wherever the shark was gone. Remora fish to be safe from the threat of other predatory fish because fish prey afraid of sharks. As for the shark, remora fish presence or absence does not affect him.
o       Another example is Commensalism symbiotic relationship between ferns or orchids with large trees and sea anemones with clown fish.
Parasitism, when one species benefits, and the other is harmed in the process. 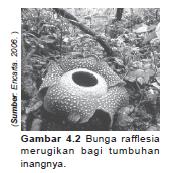 o       For example, the relationship between the parasites of citrus, flowers raflesia with its host, and the flea with the animals where he lived. Parasite feel lucky because getting food from citrus, citrus while impaired due to food taken by the parasite.
o       Raflesia sucking food made their host plants. Consequently, raflesia can flourish, while their host plants over time will die.
o       Lice obtain food by sucking the blood of its host animal's body, while the animals were seized in the skin feel itchy and unhealthy growth.
Label: Kelas 4 , Science
Read more »
Label: Kelas 4 , Science

More on this category »

More on this category »